America didn’t win World War II solely on the backs of her men and women in uniform. Without the tireless efforts on the home front, there would have been no way to keep our military supplied. So there would be enough steel to build tanks for the Army and ships for the Navy, kids loaded their Radio Flyers with scrap metal to drop off at local collection sites. Mom got out of the house and went to work in the factories as “Rosie the Riveter,” decked out in denim overalls and welder’s mask.

Sis became a “government girl,” a WAC, a WAVE, or Lady Marine. So there’d be enough chow in the mess tents Over There, families planted “victory gardens” in their backyards. “We Support the Troops” was not just a disclaimer back then; it was literally a way of life for the four years of fighting, a commitment made by the citizenry. 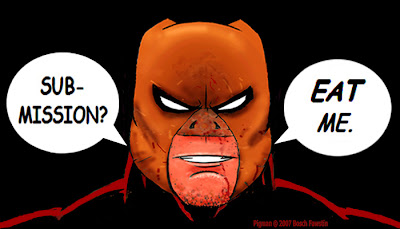 No small part of the war effort was keeping morale high—for both troops and civilians. Screen idols, radio personalities, hit-parade singers, even symphony orchestras threw their tireless support to backing the war bond drives to keep the Allies rolling. Our men in green, khaki, and blue could listen to Axis Sally and Tokyo Rose enemy broadcasts and laugh, because they heard Betty Grable and the Andrews Sisters rooting for them on Armed Forces Radio.
When Hollywood went to war, so did the funny pages. Our comic book heroes’ uniform was the red, white, and blue, and D.C. Comics’ Superman and Wonder Woman and Marvel’s Captain America and Sgt. Nick Fury battled the Krauts and Nips. (You could say words like that, back then.)
Things are a little different this time around, but what would you expect from a president who thinks that a “war effort” is shopping at Wal-Mart for duct tape and plastic sheeting? Since September 11, the War on Terror has produced few movies to rally the troops aside from United 93 and Team America: World Police, and there’s scant evidence of the battle between good and evil in the one place you’d expect to find it: comic books.

On the big screen, after seeing Spiderman fighting the Green Goblin and a mad scientist, Superman clashing with Lex Luthor again, and the Hulk fending off the U.S. Army (puleeze!), I thought I would see a superhero take the fight to the Islamists only when pigs could fly.
However, thanks to up-and-coming comics artist/writer Bosch Fawstin, that day has arrived. His inky hero, Pigman, is an anti-Jihadist crusader “born on 9/11.”
“This is your grandfather’s superhero,” Fawstin, 37, says about the ham-handed protagonist of his forthcoming graphic novel, The Infidel.
Pigman made his debut with a bold, Churchillian “Never Submit!” graphic message last September on Jihad Watch , Robert Spencer’s popular blog. Within hours, Pigman was all over the Blogosphere with his scowling jaw and square snout, fist raised, promising a pig’s knuckle sandwich to any fundamentalist nutjobs who got in his way.
More than two centuries ago, philosopher Edmund Burke said, “all that is necessary for the triumph of evil is that good men do nothing.” Fawstin, the man behind the pig, felt compelled in the aftermath of the September 11 attacks to use his artistry to stand up for America. “I couldn’t imagine not writing about 9/11,” he says. “It has to be faced. As an artist, I have to respond. It would almost take an act of will not to write about it.”
Particularly when he saw many good men doing worse than nothing. To Fawstin, a veil still shrouds the West’s understanding of Islam and its many violent adherents. “President Bush did not do his homework,” he explains. “His statement, ‘the terrorists have hijacked a peaceful religion,’ rescues Islam from the full truth of its brutal origins. Even six years later, you would think the most powerful man on Earth would understand the enemy’s religion. It disarms us by conceding moral ground that Islam is really the ‘religion of peace,’ as we in the West understand ‘peace.’”
Before that dark day when the Twin Towers fell, Fawstin, an ex-Muslim atheist, hadn’t really done his homework, either. Shortly thereafter, he read the Koran, which opened his eyes and mind to the harsh realities preached by the religion he was born into. “Islam has this conceit, that it’s actually good for us, that they’re doing us a favor to wage Jihad against us. To them, Islam—submission—is the natural order of things. This is what they mean by ‘the religion of peace.’”
The son of Albanian immigrants who arrived on America’s shores just a year before his birth, Fawstin was raised a “non-Muslim Muslim”—his description for followers of Islam who lead largely secular lives. “My father loved this country, he came here to be free,” Fawstin recalls. “We went to mosque once a year, we kept a Koran in the living room that was never read.”

Fawstin felt compelled after the September 11 attacks to use his artistry to stand up for America.

Growing up in the Bronx and New Jersey, Fawstin found his true calling in the comic books his older brother Tony brought home, and he was instantly hooked. He sketched up a storm, soon winning prizes for his drawings at school and community contests. He earned his father’s pride, but also his skepticism. “He thought it was fruity. He didn’t want me to stand out,” Fawstin remembers. “One day, he ordered me to bring him all my comic books, saying he was going to burn them. I went to my room and brought him fifty of my least favorite ones, and stashed the rest out of sight.” Fortunately,   he discovered his father was more of a softy than he let on: He didn’t burn them, and the boy’s mania for art continued.
His art was put on hold occasionally as he worked in the family restaurant business. Still, he kept his eyes open, drawing inspiration and ideas from comics illustrators like Frank Miller and Alex Toth, whose severe technique Fawstin describes as “cutting through every window dressing thing most artists do. He wasn’t concerned with excess lines. He cut straight to the truth.”
When he was nineteen, he saw the 1949 film version of The Fountainhead , whose hero’s unbreached integrity resonated with him. He later read the book. “I identified with Howard Roark on a personal level, because I’m also a redhead. There was a lot in sculptor Steven Mallory that impressed itself on me,” he adds.
When he was twenty-five, he decided to pursue writing comic books as his life’s work, enrolling in night classes at New York’s School of Visual Arts. “I milked the courses for all they were worth,” he says. “I sat in the front row. I set myself the goal of doing everything, to make every line and word mine, to create a story that would come out of who I am.” 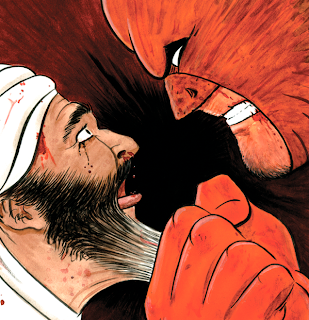 His experience in the restaurant trade provided the background for his first graphic novel. Table for One, published in 2004, seems to happen in a fishbowl. Printed in black-and-white, it recalls Robert Burks’s expressionist cinematography from The Fountainhead through its converging lines, low angles, and pools of light shooting from arc lamps. It’s a black-and-white piece in the moral sense as well, told through protagonist Will Howland, a quick-witted waiter on his last day on the job.
Will works for Ritchie, a bloated scumbag of a boss. “He’s a composite of a lot of bosses I worked for, that’s why he’s so big: he had to fit them all!” Fawstin quips. Dedicated to “The Individualist,” Table for One garnered him a coveted Will Eisner Award nomination in 2005 for “talent deserving of wider recognition.”
More importantly, Fawstin earned the respect and admiration of his hero, Alex Toth, after sending him a pre-publication copy of his work. He treasures Toth’s endorsement more than any other. “Artists of his generation were all about mastering the craft,” Fawstin said. “You’d get no respect from someone like him unless you knew your trade.”
Although Islamic terrorism is treated only parenthetically in Table for One, which takes place days after September 11, in The Infidel it’s inescapable. A story as old as Cain and Abel, Fawstin’s narrative revolves around two brothers who are forced to confront their Muslim background right after the jihadists attack America.
One brother, Killian Duke, is more or less a stand-in for Fawstin. Killian is an artist who creates a superhero comic book about a writer named Frank Warner, anti-jihad blogger and family man by day. Warner’s after-hours nom de guerre is “Pigman,” who dons a pigskin cape to hunt down the terrorists and break the back of jihadism. “Pigman does the job politically correct Washington won’t let our soldiers do,” Fawstin explains.
Killian’s brother, Salaam Duka, goes the other route: He becomes a “born again” Muslim, submitting heart and soul to the faith of his forefathers. Fawstin uses the duality of the brothers’ splintered relationship to explore the choices Muslims must make. “It’s really up to them. I have not heard even one well-meaning Muslim say, ‘Muhammad committed atrocities,’” he observes. “Muhammad made Islam Muslim-proof when he said, ‘Islam is the word of God.’ Case closed.”
While Fawstin finds little of value in Islam, he is nonetheless cognizant that innocent Muslims could be recklessly targeted. Before he can annihilate the terrorists, Pigman must first finish off a copycat, who twists Pigman’s anti-Islamofascist mission by wantonly attacking peaceful, productive Muslims.
The Infidel serial is painted in bold watercolor brushstrokes. Fawstin’s stylized palette is full of rich and glowing hues, evoking the color schemes of painters like Dali and Hopper. Pigman’s language is just as colorful as he tosses off puns and one-liners. “Seventy-two virgins in paradise?” he snarls at the enemy. “Ha! Seventy-two rapists in hell!” “If an actor played Pigman, it would definitely be James Gandolfini,” Fawstin remarks. “Pigman has a gut, he eats more than he works off.”
And, although Fawstin need only read newspaper headlines—of riotous murder sprees by Muslims offended by Danish cartoons of Muhammad, and the murder of Dutch filmmaker Theo Van Gogh by a Muslim radical—to comprehend the firestorm his porcine hero might unleash, he remains optimistic about the Islamists’ ultimate demise.
“The more successful the terrorists are, the less successful they will be,” Fawstin remarked in an on-air interview with Shire Network News. “Because more of us will wake up and demand our leaders do what they’re supposed to.”
Until that happens, we can always take inspiration from Pigman, who makes mincemeat of those wascally Wahhabists while he saves our bacon.
Bosch Fawstin’s The Infidel and Table for One can be purchased at fawstin.blogspot.com .