Russia is annexing Crimea. The act, in both means and motive, announces to the world that nationalist imperialism lives. Ironically, Russia's annexation of Crimea is an unobjectionable result, even though it has been undertaken in the wrong way and for one of the worst of reasons.

Vladimir Putin’s aggressive invasion of Ukraine and annexation of Crimea put me in mind of Hitler’s invasion of the (pro-German) Sudetenland in 1938. Now we can sympathize with the despised Neville Chamberlain. After all, Hitler’s means and rhetoric were noxious, but the truth was that in the Sudetenland regions of then-Czechoslovakia, a sizable majority could have been expected to favor unity with Nazi Germany. And Czechoslovakia’s borders seemed arbitrary: the country had only existed for 20 years at the time of the crisis.

Similarly, a sizable majority in Crimea might well be expected to favor annexation by Russia. The recent trumped-up plebiscite in Crimea under de facto Russian control is not what a free, legal process would produce, but it is probably indicative. And this attitude among the ethnic-Russian populace there has been known for some time. Plus the borders of Ukraine hardly seem set in stone: the country itself has only been independent for a bit more than 20 years itself.

But the Russian invasion and Putin’s justifications for his actions, combined with the very nature of the Putin-ruled corporatist Russian state, signal that Russia is a dangerous and aggressive threat to the free world. It is clear that the goal of the Putin regime is both to enhance its own power and to enhance the size and power of the Russian state. Putin complains that NATO seeks to hem Russia in—yes, just as Mexico and Canada “hem” the US in and just as Germany and France are “hemmed” in. NATO is a defensive alliance devoted to protecting the rule of law and democracy. It asks nothing of Russia but that it live within its borders, respect international law, and deal with other countries through trade. What does NATO seek to constrain Russian from doing? Well, NATO opposes Russia annexing its neighbors, invading other countries, that kind of thing. 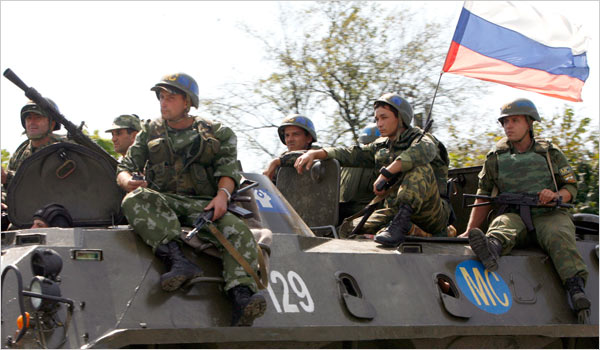 The fundamental motivations for Putin’s annexation of Crimea are nationalism and imperialism. It’s imperialism that seeks military expansion as the measure of a country’s greatness. Imperialism makes one country the enemy of others, whereas countries should exist in harmony and become great through their citizen’s achievements in freely producing value. If Russia seeks the power to extend its military sway , it can only be a threat to freedom in its region and in the world at large.
Meanwhile nationalism , the idea that people of one ethnicity or language should live under one government, is the grossest tribalism. It claims that one’s ancestors and the dialect of one’s childhood justify binding one to other people by force. It assumes that one is defined by those traits. But there is a better way for people to associate, one enshrined in law in the US Constitution and elsewhere: to associate based on values. It is to say that what makes a citizen is one’s willingness to embrace certain values, regardless of one’s race or language-group. Ultimately, what we need is a world where people can freely choose to immigrate or emigrate as suits their needs. This is what individualism and justice imply that everyone has the right to do. Ethno-linguistic community is a matter for voluntary comunities, not politics.
So look out, world: the door is now open to naked military aggression in a way that hasn’t been acceptable since World War Two. And an alliance of the free countries is as needed now as it ever has been.
---
William R Thomas is the Director of Programs at The Atlas Society.
Explore:
Nationalism: Will it help a country thrive? By William R Thomas
Foreign Policy 1: Free World Order by William R Thomas
Bad Old Days Are Here Again by Stephen Green